FaZe Clan are the champions of the PlayStation Experience Invitational after they defeated Orbit eSport 3-1 in the finals.

The Grand Final marked the second time these teams faced off at this event, FaZe having previously taken down Orbit 3-0 in the Group A winners' match. The defeat caused some Twitter tension between FaZe’s James “Clayster” Eubanks and Orbit’s Rhys “Rated” Price.

Orbit bounced back in the Group A decider match, defeating Renegades 3-0 to move on to the bracket. In the semifinals, FaZe Clan beat Rise Nation 3-1 and Orbit squashed Luminosity Gaming with a 3-0 win.

When it came to the Grand Finals, Orbit claimed the first Hardpoint on Scorch with a 250-198 final scoreline. FaZe came back to take Search and Destroy on Crusher with a 6-4 victory. Uplink on Precinct was pretty back-and-forth, but FaZe eventually took the win with a 10-6 final score.

In the second Hardpoint on Breakout, Orbit built an 80 point lead early in the match, but FaZe fought back, eventually overcoming Orbit with an nail-biting 250-245 final scoreline.

The PSX Invitational is the first LAN event of the Call of Duty: Infinite Warfare competitive season. FaZe Clan are one of only a few teams to have kept their same roster from Black Ops III, while Orbit instead opted to build a new roster entirely, picking up Rated and Joseph “Joee” Pinnington from Splyce and Trei “Zer0” Morris and David “Urban” Marsh from Team Infused.

Olivia Da Silva is a news editor at theScore esports. She likes piña coladas, getting caught in the rain and dank no-scopes. You're eligible for free high fives if you follow her on Twitter. 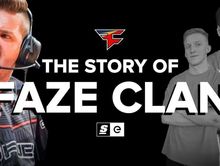