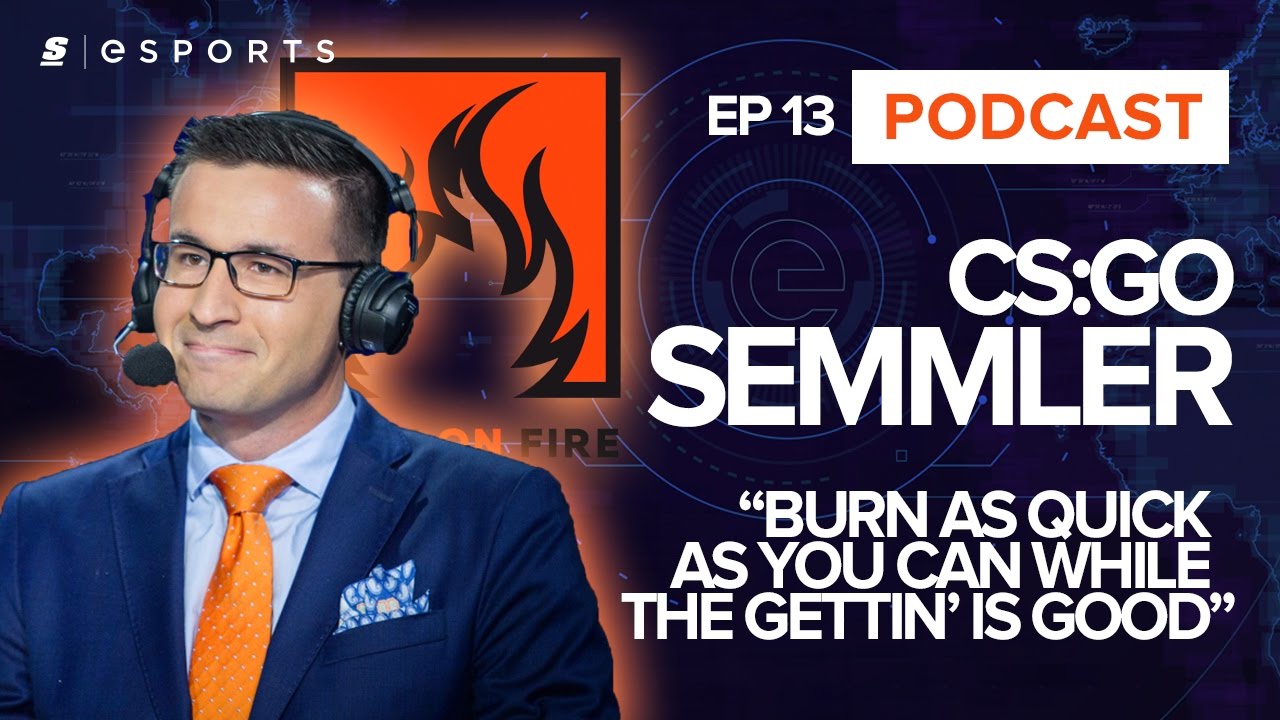 Semmler: 'It’s still so important in CS and esports as a whole to just burn as quick as you can while the gettin' is good'

0:48: Colin, Ryan and guest Dennis shoot the shit about DH Austin
3:30: Semmler joins the cast, explains why he skipped DreamHack
6:45: On over-saturation in the CS:GO scene
8:56: On personal issues that had him reconsidering his career as a caster
12:22: On personal burnout, and the mentality of "you can't say no"
15:37: How Semmler and Anders got hooked on streaming and casting
22:04: On the new CS:GO reality show he's hosting, GAMERZ
33:36: "If people can get the sense that you're not bullshitting them, that this is who you are, that's where you get fans"
40:00: On CS:GO right now: back to "a state of headshots"
41:55: Semmler roasts Machine's outfits, from cs_summit to SL i-League
48:01: "It's f**king expensive to put on a LAN event, I understand why they want to do online leagues"

Few people in the CS:GO scene are as opinionated, or as loud a Semmler. And we’re not just talking about his ties.

Appearing on theScore esports Podcast Monday, the veteran CS:GO personality opened up about hardships in his personal life that had him rethinking his career as a caster, detailed his role in hosting the new reality show GAMERZ and gave his thoughts on the headshot-heavy state of Counter-Strike today.

Throughout the podcast, Semmler came back to again and again to his thoughts on an old school attitude in esports: the compulsion to never say no.

“I think it’s still so important in CS and esports as a whole to just burn as quick as you can while the gettin' is good,” he said. “And that’s so deeply ingrained in all esports players, anybody who works in the industry — that you just have to go, you have to grind as fast a possible.”

It’s that same way of thinking that Semmler fell into when facing adversity in his own life recently.

Speaking on his mindset as a professional in the CS:GO scene right now, he opened up about personal struggles that had him re-evaluating his career as caster, and even his love for gaming.

“One of my childhood friends and my brother both passed away within a month of each other last year, at the end of last year,” he told theScore esports Podcast. “And my mentality at the time was, ‘I’m not saying a f**king word, I’m going to put my nose down, as long as I focus on the work that’s what’ll get me through… and I’ll deal with it as it goes.’”

“I realized that wasn’t an effective way to cope, that I was lashing out a lot to different people who were close to me in my life — coworkers or others — and I really wasn’t handling it very well,” he said.

“Esports in competition is very much like, you don’t make excuses. You just f**king take what you got and you go with it and you do what you can with it. But having that mentality I think sets you back in a way. When you legitimately have a reason to slow down, you tend to say, ‘No f**k that,’ and you keep going.”

That personal hardship, and his way of coping with it, had Semmler rethinking everything.

Just talking about things publicly was its own battle.

For the foreseeable future, Semmler isn’t going anywhere. With a career that spans more than half a decade, practically a lifetime in the world of esports, his passion for the game hasn’t waned yet.

“The day it turns into a grind or that I start thinking about money instead of doing it for the sake of doing it — if the day where the first question I ask myself is, ‘How much am I getting paid to do this?’ [comes] then I’m going to start seriously thinking about what else I could do.”

The state of CS: Welcome to headshotville

The 28-year-old caster, host and analyst also made his thoughts known on the competitive climate in 2017.

“It’s CS:GO right now where we’ve kind of come back around, it feels, to a state of headshots,” he said.

“That’s where a lot of the strengths lie, especially with how effective UMPs are. We don’t know where we’re going right now in CS. There’s a lot of speculation going on right now with the UMP discussion, the pistol discussion is older than sin, but it still comes up because it’s still important.”

The meta right now comes down to player skill above all, he said.

“I feel like right now a lot of it is still going to be very much based off of your individual ability. That’s where we are right now in CS. Look at swag, for example. I mean swag is just unbelievably good — best player in NA, basically. Guy hasn’t competed for two years plus now, comes in, and they’re like, ‘Oh, so what did you do differently, did you prepare for this event?’ He’s like, ‘Nah I just kind of player like in rank S, you know, it was fine.’”