Liquid's jdm: 'It's so hard to find practice nowadays, especially teams that take it seriously'

Team Liquid's CS:GO squad has experienced some highs and lows as of late. After their crash following the Columbus Major and ESL One: Cologne 2016, Liquid has been putting together the pieces, building one of NA's strongest squads.

The team is headed into the ECS Season 3 Finals following a 3rd-4th place finish at the EPL Season 5 Finals. During a press conference hosted by ECS, Joshua "jdm" Marzano said that the team is still working to be the best in NA once again.

What follows is a transcription of selected questions from ECS' round-table press conference, where questions were asked by journalists from several outlets, including theScore esports.

I wanted to talk just generally about the Liquid documentary that came out yesterday. What are your general thoughts on getting filmed, is that something you've gotten used to at this point?

I'm not necessarily comfortable with it yet.

We get recorded a lot, I think this whole weekend we're going to be recorded, just like we did at Pro League. It's nothing really we can do, it's just something the org wants to do and we don't necessarily agree or disagree with it.

It's just really good for promoting and marketing also. More exposure for me as a player and also our team, it helps a lot. I'm not necessarily a big fan of drama and conflict, and certain things that are happening with the team, I don't think other people should know about. It should be a team thing that we just deal with.

Personally, we shouldn't have to show the world what we go through, but people see it differently and some see that as entertainment. I just don't agree with certain aspects of that.

You have your own sub-brand, Lounge Nation. Have you sought out a talent agency, or have you gone to Liquid themselves and asked, 'hey I want to take this Lounge thing to another level?'

I haven't really done anything like that. Right now, I'm about to launch my online store for merchandise. But I've been working on it for so long, and I'm still working on it, I'm not sure if I 100% love everything I'm doing with my merchandise, but we're getting to that point.

Other than that, there's not really much I've done with my actual brand, and what I'd love to do is push as much as I can with it. Because I'm just trying to send positive vibes, you know, show gamers that you can have fun.

Lounge Nation, for me, it's more than actually playing Counter-Strike. It doesn't seem like it, but I'm a really easy going guy. Lounge Nation is the way I play, but I'm also so positive with everything outside the game, I want to show the world that you can be respectful and positive to everyone.

And I'm assuming that positivity reflects in the way you communicate with your teammates?

Yes, it 100 percent is. Pretty much all of our matches, I'm the one that reminds someone when we're in a hole or if we had a really bad round, to forget about the last round and focus on the next. Or if two people are arguing or something like that, so yeah I'm definitely that person on our team.

Right now, I feel that NA is at a pretty good point. Liquid looks good on paper, Cloud9 are maybe on a little bit of a downturn but they still look competitive, and then we have CLG coming out of nowhere with koosta playing well again, and even NRG are pulling off some upsets. It looks good for NA overall, but when it comes to international competition we fall short. What's your thoughts on that?

I think there's a lot of factors that play a part of that. One of the big things is that we don't have enough practice here in North America.

I think that's another reason that NA teams are so inconsistent, because we don't have technically the experience that all these European teams have. They're constantly at these tournaments for how long Counter-Strike has been around, it's always been European teams that have been on top.

I think it's practice that holds NA back.

Going off of that point, SK Gaming, they're connected to the NA region because they're close to us, but where do you think their skills came from?

I know SK has bootcamped a lot in Europe, that's one thing that, like I said, we try to do as much as we can, seeing what it does for SK. They're always practicing.

SK is probably the team that we play the most in NA and it helps a lot, but then again, if you go to a tournament, we both know what the other does. They know how we play them on every map and you get used to playing another team, you have an understanding of what they do and try to adapt.

They're already solidified as a top tier team and a top three team in the world, so they're always going to be at these tournaments no matter what, so they continue to get experience at all of those. We're not like that.

We're trying to be the best NA team, so we can get these slots at these tournaments, and if you do that, you start getting invites, constantly going to events and getting experience. 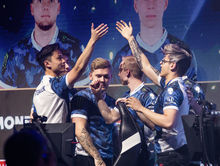