In Barcelona, the team started off strong by taking down Fnatic 16-10 in the opening series, but things went downhill from there. They got one more win off of gBots eSports Club, but got eliminated after losing two lives to Fnatic and one from Astralis; they finished in the bottom four.

They didn't fare much better in IEM Katowice as they didn't make it out of the group stage. They got a single win off of FaZe Clan, 16-12 on Train, but lost to Astralis, Virtus.pro, Tempo Storm, as well as E-Frag.net Esports Club, the underdogs of the group. They finished in the bottom two, tied with The MongolZ.

Out of all the players, kioShiMa had the worst HLTV.org player rating with 0.87 across IEM Katowice. Dan "apEX" Madesclaire had the second lowest with 0.93, while Nathan "NBK" Schmitt had the highest with 1.02.

EnVy's most recent performances were a far cry from what we saw of them prior. They won the Global eSports Cup Season 1, just two week before ESL Expo Barcelona and they won the most recent Major, DreamHack Open Cluj-Napoca 2015.

kioShiMa's replacement in DEVIL currently has a 1.08 rating across 29 maps from the past three months. In that same time period, DEVIL, along with his previous team Team LDLC.com White, won ASUS ROG CS:GO Assembly Winter 2016. He's also competed in a number of other competitions, but hasn't been able to achieve any higher than Top 8.

In EnVy's press release, NBK commented on the roster move, speaking highly of his new teammate.

"DEVIL is a hard worker and proved it with LDLC.White," he said. "I have faith that he will keep proving his worth in the future. Bringing a new player to the front of the scene is always exciting and I am confident that we can achieve great things so long as the effort is there."

According EnVy's press release, kioShiMa is still on the team, but has been benched in the interim. They will continue to honor his contract until a transfer deal can be reached or if it's decided that he will rejoin the roster.

The roster change also comes three weeks before the start of the upcoming Major, MLG Major Championship: Columbus. EnVy will utilize DEVIL there, but the roster will debut during Week 4 of ESL Pro League where they will face G2 Esports, FlipSid3 Tactics and Astralis.

EnVy's managing director Mike "hastr0" Rufail, spoke about the roster change in the organization's press release, talking about the team's recent performances and that he felt a roster change was necessary.

"Our team works very hard to maintain the pedigree we have developed as defending major champions," he said. "The recent results have not been what we have come to expect and what we are working towards."

"It is always a last resort for us to make a roster change, but in this case, we believed it was necessary in order to regain the momentum we had going into the last major of 2015." 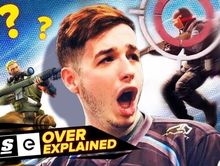