Na`Vi sweep NiP 2-0 out of the MLG Major, advance to semifinals

Natus Vincere have defeated Ninjas in Pyjamas, shutting them down in 2-0 sweep, and the Swedes have been eliminated from the MLG Major Championship: Columbus.

Considering the team was playing with a stand-in, though it was their coach in Björn "THREAT" Pers, NiP went farther than many expected.

The first map of the set was on Inferno and Na`Vi exploded out of the gate. They took the first half on the CT side and were up 12-3, NiP made a valiant effort on their CT half, including a disgusting SCAR-20 ACE from GeT_RiGhT.

But NiP's efforts were not enough to make up for their first half deficit and lost the map 9-16.

Next up was Mirage, a map that heavily favored Na`Vi and it played out as expected. The Ukrainians went up 10-5 in the first half and closed the series 16-10.

Natus Vincere move on to face the winner of Fnatic versus Astralis. 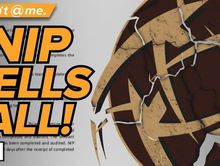