Highlight: FalleN gets the wallbang tag, but Zeus gets the round-winning headshot

No matter how much damage you take, all that matters is the kill. Zeus landed a deadly headshot to clutch a round, despite getting brought down to six health from FalleN's wallbang.

It was down to a 1-versus-1 between Natus Vincere and Luminosity during the MLG Major Championship: Columbus Grand Finals as Zeus defended the bomb plant against FalleN.

Zeus knew he was going up against an AWP and resisted the urge to peek, but FalleN tagged him with a shot through the wall anyways. Despite his six remaining health points, Zeus went aggressive, landed the headshot and instantly killed FalleN to take the round. 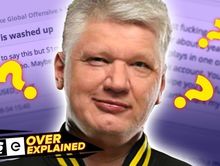