LGD Gaming drop out of MDL, Vici Gaming to replace them

LGD Gaming has withdrawn from the MarsTV Dota 2 League's Autumn 2016 installment as it looks to give Lu "Maybe" Yao some time off.

A tweet from the organization's official Twitter account revealed that their roster wouldn't be able to participate at the event's offline playoffs, set to get underway Sept. 28. LGD pointed out that Maybe had been training for months for The International 2016, and needed some rest.

In the meanwhile, the organization said that the team's manager Fei will compete in Maybe's stead as the team plays in season 2 of the Dota 2 Professional League as well as the qualifiers for the third season of the Nanyang Dota 2 Championships.

LGD qualified for the event as a result of their first-place finish at season 1 of the DPL. Replacing them in the event will be DPL S1 third-place finishers Vici Gaming, according to a Facebook post by event organizer MarsTV.

Evil Geniuses, MVP.Phoenix, OG and Team Secret all received direct invites to the event, while Newbee and Vici's DPL finishes are the reason for their participation. Another two teams will be selected through the Chinese Qualifiers, which started today and are set to run until Sept. 22.

Josh "Gauntlet" Bury doesn't want your love, he just needs your Sand King to make something happen. You can find him on Twitter. 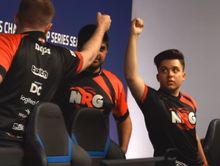