Virtus.pro have been eliminated from the Dota 2 Asia Championships CIS Qualifier after forfeiting two series due to internet connectivity issues.

VP originally experienced internet issues in their first series against Effect on Feb. 3, resulting in a default loss for the team. In the aftermath, VP's General manager Roman Dvoryankin apologized to fans and promised that the situation would not occur in the future.

"Today's situation that occurred in the first game of the DAC qualifiers is unacceptable for an organization like Virtus.pro," Dvoryankin said. "Until such things happen all the discussions about 'a new level,' 'a serious approach' and so on are just meaningless talks. I would like to apologize to our fans and organizers of the tournament. We have made proper conclusions and will take steps in the near future."

In the subsequent losers' match against Team Spirit on Feb. 6, VP once again experienced internet connectivity issues and had to forfeit the match. Due to the structure of the qualifier, VP were subsequently eliminated from the tournament.

Preston Dozsa is a news editor for theScore esports whose journalism idol is Dino Ghiranze. You can follow him on Twitter. 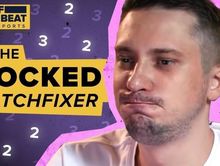 May 11
Counter-Strike: GO
The Major-Winning Matchfixer Who Dodged a Lifet...