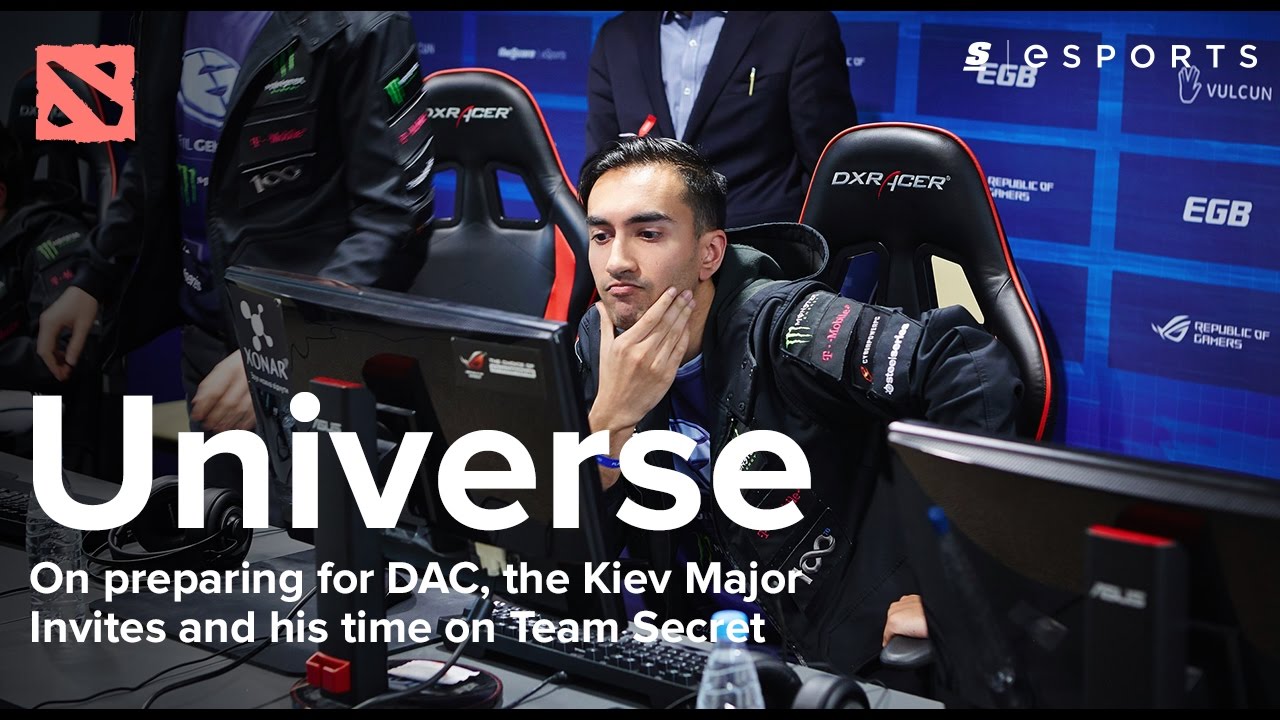 Universe on lessons learned on Secret: 'It kind of made me realize that you can't just put 5 really great players together and hope it works out'

Despite fierce competition in recent months, Evil Geniuses remain the kings of North American Dota, and much of their success can be attributed to the team's offlaner, Saahil "Universe" Arora, who consistently plays at a high level no matter the tournament.

Aside from a brief stint on Team Secret last year, Universe has spent most of his career on EG.

As EG was preparing to bootcamp for the Dota 2 Asia Championships 2017 and the Kiev Major, Universe spoke to theScore esports about the state of NA Dota, what makes EG different from other teams and his time on Team Secret.

Were you surprised at all that EG received an invite to the Kiev Major?

I wasn't really surprised. We won China Top and we won Dota Pit as well, so I wasn't that surprised that we got the invite. I know a lot of people were not sure if we would get an invite, but I'm pretty sure we would have gotten it even if we didn't play well at Dota Pit.

Were you surprised at any of the other invites?

I didn't expect them to invite Wings, but that makes sense as well. It's fine for them to invite Wings since they haven't changed their old roster and they're still playing fine. I think all of the invites kind of made sense. There are arguments to not invite Ad Finem, but they chose to invite them too.

Moving on to the qualifiers for Kiev, are there any teams that you are paying attention to?

Looking at the American qualifiers, I guess Team NP seems to be playing pretty well right now. It'll be interesting to see how they do in the American qualifiers. As for the China qualifiers, I have no idea, I have no clue what's really going on there. Europe, I want to see if B)ears is able to take it. They have some competition in Secret over there, but I personally think B)ears will take it. So I think NP and B)ears are the most underrated.

Speaking of B)ears, they'll also be facing competition from Cloud9 and Alliance. Do you Europe is the most stacked region for qualifiers?

I think NA is pretty stacked too. Europe is always stacked for the qualifiers, but I think this year there's a lot of good NA teams. Those two regions will be the most interesting to watch for me.

How happy are you with EG's performance since the Boston Major?

I'm pretty happy with our performance. We're learning stuff as a team and we're coming together pretty well. We just have to keep honing our teamwork and I think we'll be fine.

It didn't take long. I think it was a good thing for us, because we had some people come from different teams. Like, Artour was on Secret, I was on EG, Cr1t- was on OG, so I think a new patch was a good, fresh start for the team and a way for us to all be on the same page from the beginning of a patch. I think the patch worked out really well for us in that way.

Are there any changes that you'd make to 7.00 right now?

I just don't enjoy playing against Keeper of the Light right now. I would change KotL, the way it worked. Other than that, I don't have many changes.

What makes KotL rough to play against?

It's just annoying for an offlaner. For pubs especially, he just throws Mana Leak on you and there's almost nothing you can do unless you farm up an item. Unless you play like Abaddon or Omniknight. It just makes the game very unenjoyable from an offlaner point of view.

What's your favorite hero to play as right now?

Favorite hero? Let me think... I enjoy playing Abaddon recently. Centaur can be fun sometimes, but just Abaddon I suppose.

What about your least favorite offlane hero?

Least favorite... Probably Slardar. It's just kind of boring. All you can do is stun, try and farm up your Blink Dagger, you can't really do anything fancy.

What do you think makes EG different from other Dota teams?

I think we have really high individual talent on this team. Usually on teams there is some weak spots here and there, but I don't think we have any weak spots individually. It's easier for us to know what went wrong in a game, which sets us apart.

How is Cr1t- as a captain since he took over the reins from ppd?

It's fine. Honestly there hasn't been much of a change for me, personally, from his leadership and ppd's. I think I'm able to do the same things that I did in the previous roster and help out in the same way.

What makes Cr1t- different from ppd? Any noticeable differences?

He's more open to some ideas and I guess he meshes better with certain players on the team, personality wise, than Peter did. Those are the main differences.

Fear retired back in September after TI6. Now that he's the coach for EG, has your relationship changed at all?

Nothing's really changed between me and Fear. He helps out with our drafts mostly and our strategies.

He gives another outside opinion. Sometimes it's hard to see an outside perspective sometimes when you're playing, and he's there and he's very familiar with the system we have and it's nice to have him around and tell us what we're doing wrong.

Would you say NA Dota is more competitive now than it has been in the past?

NA Dota is a lot more competitive than it used to be. You have Onyx, you have compLexity, you have NP, you have all these teams now. Before it was pretty easy. Back during TI4, TI5, EG was the uncontested team, any team we'd play would just get destroyed. But that's not the case anymore. So teams have definitely made strides and caught up

Which team do you think is the most underrated team in NA?

The most underrated team in NA would be Team NP or compLexity. I think it's Team NP though. I think they're a pretty good team, they just have yet to show it on LAN.

How would you describe each of your teammates on EG?

Cr1t- is pretty logical, Artour is a clown, SumaiL is the flashy guy and zai is quiet.

I guess I'm pretty consistent. For every team it's nice to have the player that does the same thing over and over again. It's nice to have players who create space and make flashy moves. I think you need a balance of the two, and that's what I provide to the team.

Going back, do you have any regrets over the past year?

I don't really have any regrets. I know a lot of people think my move to Secret was bad, but I think at the time it really needed to happen. The roster on EG just wasn't working out, I wasn't enjoying playing Dota at the time. So it was really nice to have a nice change of pace on Secret honestly. Our results weren't that good, but I don't have any regrets about making that move. I don't think I have any regrets in Dota.

When you returned from Secret to EG, did you bring anything back with you? Any lessons, any information that you applied to EG?

It was a pretty humbling experience. I think, when I went to Secret, my intention was to make this really good team. I always wanted to be part of the best team, and that's what I tried to do when I went to Secret. It kind of made me realize that you can't just put five really great players together and hope it works out. Being on a team is more than just that, so it made me a little more humble.

How do you recover from losing?

Have you ever experienced a loss that you found difficult to move on from?

I've thought about our loss at TI6 quite a lot. I haven't thought about other losses other than that as much. TI4, TI5, TI3 was pretty bad too, but TI6 was definitely a tough loss.

Did it take you long to learn that lesson, not to dwell on losses?

It didn't take me that long. I think I've always known it from an early age.

What's a typical day like for you? A perfectly average day.

If things are going well I go to the gym in the morning. Then I come back and we scrim in the afternoon. And then I play some pubs and I go to sleep, maybe a couple CS:GO practice rounds here and there. But that's an ideal day. I didn't go to the gym yesterday but I hope I can continue going.

I think what we do is we either play one or two best-of-threes a day with another team. So we play at most six games of team practice together. And then however many pubs people feel like playing that day, so it could be the same, or more pubs than that or less. Depends.

How are you currently preparing for DAC and the Kiev Major?

As a team, it’s important for us to be in sync going into every competition. The XFINITY Training Facility in Alameda gives us a reliable home base to train together on XFINITY Gig internet which lets us simulate being on LAN. Being together allows us to develop and test new strategies, and overall, get into a good rhythm with each other prior to tournaments. We are playing 10 or 12 hours of Dota a day when training, and having a facility that is so well equipped makes a world of difference.