This Week in Gaming: Visa drama, Fresh Northrend beats and the return of Lúcioball

On Monday, Counter Logic Gaming was acquired by the Madison Square Garden Company (MSGC), joining the ranks of heavy-duty traditional sports teams like the New York Knicks (basketball, the one with hoops) and the New York Rangers (hockey, the one with the nets).

The announcement is hype for several reasons, not the least of which being that the $10 million Riot wants for a NA LCS spot is chump change to a company like MSGC.

On a philosophical level, its further proof that traditional sports and people in the real world are looking at esports not as an oddity, but as a field primed for major growth that can make them major money.

For a more nuanced take on the topic with additional comment from MSGC, take a look at Daniel Rosen's recent column.

Admiral Bulldog getting denied entry to the US

It wouldn't be TI without visa drama, but did it have to strike former Alliance player Henrik "AdmiralBulldog" Ahnberg? The 26-year-old was turned back at the gates by US customs the day before the group stage due to not having the correct visa.

"We have been looking forward so much for this so just having the highlight of the year turning into one of your worst life experience, it just sucks," he wrote in a statement.

"In the end I don't know who is to blame I just told the customs what I was there to do and they wouldn't allow me in without a work visa. I assumed a b2 business visa would be fine and since valve/pgl didnt they say hey that visa won't work you need this I assumed what I had was fine."

While AdmiralBulldog is out his travel expenses and will have to return his fee to Valve, he and his girlfriend did use the opportunity for a trip to Dubai, so I guess in the end every cloud has a silver lining.

On Aug. 8, the Summer Games event will be returning to Overwatch, giving you a second chance to spend absurd amounts of money trying to get skins like American McCree and Nihon Genji as well as new ones.

I'm a little torn about this. On the hand, Lúcioball was hype and the fact that it's getting a second stadium is even better. On the other hand... like, there are no Olympics this year. I guess the theme still sort of fits for a general summer event and, yes, Jeff Kaplan's Developer Update clearly positioned this year's iteration as a mea culpa for problems people had with last year's, but still, it would have been nice to see an all new event with all new content.

But hey, I wouldn't complain if Lúcioball made it into the Overwatch League.

Hearthstone Game Director Ben Brode's plot raps are swiftly becoming the best thing about Expansion Season. Following up on the success of March's hit single "Un'Goro: The Journey," BBrode has dropped a hot new track detailing Arthas Menethil's transformation into the Lich King for all those homies who aren't up to date with a decade's worth of Warcraft lore.

Seriously though, if you haven't played Warcraft 3 or need a refresher course, the song is actually a great summary of events and the beats are fresh. Oh, and if you want to keep up with all the Knights of the Frozen Throne cards revealed so far, be sure to check out our handy-dandy card tracker.

Sasha Erfanian is a hype man for theScore esports. Follow him on Twitter and answer his riddles three. 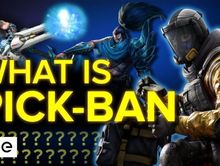