The newest edition to the Heroes of the Storm cast, Overwatch Support Lucio, speed boosted his way into the PTR on Monday.

Blizzard also amped up Valeera, giving her a minor health boost and "a small increase in power to help her overall win rate."

Alongside the addition of the futuristic DJ and Valeera's buffs, Murky's new and improved talents have also been revealed.

He has retained his core abilities, but talents have been overhauled at every tier. An increased health pool makes him less susceptible to burst, while an increased cooldown on respawning from his egg makes it all the more important to place his home strategically.

The PTR patch changes will be available for play testing until Feb. 13 so break them down while you can.

Click here for the full patch notes via us.battle.net 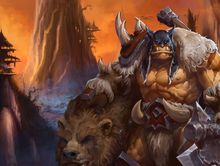