Srey and Goku trying out with Tempo Storm, Dreadnaught retires

Fans of the North American competitive scene have finally caught a glimpse of the team forming once more under the Tempo Storm banner.

On last night's Town Hall Heroes, Tempo's manager Jared "Zoia" Eggleston confirmed that the team was trying out free agents Quinn "Srey" Fischer and Francisco "Goku" Avalos, and that he was "about 90 percent" certain that the team would ultimately sign both players.

He also announced that Wade "Dreadnaught" Penfold (pictured, left) has decided to retire, and that Kurt "Kaeyoh" Ocher (right) would take over as team captain while Josh "So1dier" Miller moves back to the ranged assassin role.

"Dreadnaught is retiring as a pro gamer, he's going to stay with Tempo as a streamer. Potentially a coach, down the line," Zoia said on the show.

He emphasized that this was Dreadnaught's decision, that Tempo would have gladly continued with him on the roster, and that he isn't retiring because of losing his spot.

"This is something that Dread wanted. It's not like he was kicked off the team and then decided to retire instead of looking for another team."

Kaeyoh has been a stable and calm personality on the team, as well as a mechanically skilled ranged player. He is a natural pick for captain of this squad, Zoia said on the show.

"I'm completely confident in Kaeyoh's ability to lead this team. He's always been a fantastic player."

So1dier will move back to the ranged assassin role, which he played competitively before Tempo Storm acquired Symbiote Gaming. Zoia also mentioned on the show that it is possible that they could even move So1dier to support, given their difficulty in finding a support player to replace Dreadnaught.

Meanwhile, the new players add a lot of talent, but also some uncertainty.

Though Srey has seen only limited competition on a stable team, his consistently high MMR placement on both community website HOTSLogs and on the official Blizzard leaderboards has made him a player of interest. After BlizzCon wrapped up, Srey formed Vox Nihili and competed in several of the Enter The Storm qualifiers. He will be taking over shotcalling duties, and will play warrior for the team.

On the show, Zoia credited Srey with having serious devotion to improving both as an individual and as part of the burgeoning squad.

"Everyone has got so much motivation. That's my favorite thing about Srey. This guy has the motivation to play a million hours a day, and then he loves to just ... take hours reviewing replays together, breaking down what we did wrong and stuff. Every night, the team's watching replays."

Goku is another player who has moved around. His first big break was with Goon Squad, which was eventually picked up by Luminosity Gaming. After that squad disbanded, he played with Bang Bang and then alongside Srey on Vox Nihili.

"It's very rarely that, just looking at a person's play alone, you get impressed. Goku has always been one of those players where it's been like, he could be really good if you got the right team around him," Zoia explained on THH.

These sentiments regarding Goku's play are a recurring theme: during his time on Bang Bang, Stafford "McIntyre" McIntyre said in an interview that with "some players, it feels like you can outsmart them or outplay them. When I've played against Goku, he was one of the players in the scene that always was outsmarting me. That's where I gained a lot of respect for him."

The roster change announcement on Town Hall Heroes was only one section of the show, which also discusses a series of topics every week. But before moving on to another section, host Jake "SolidJake" Kulinski offered his thanks to Dreadnaught for his contributions to the scene.

"Dread's been a pretty popular figure in the North American Heroes scene. It's sad to see him go, but I'm happy to hear he intends to stick around in some capacity, even if he's not going to be playing."

Josh Bury feels the hatred of ten thousand smurfs. You can find him on Twitter. 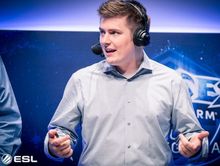 Nov 8 2016
Heroes of the Storm
Dreadnaught on casting and regional pride: 'I'm...