At 31:45, Choi "Huhi" Jae-hyun is 9/0/2 on Aurelion Sol — a champion that has been banned against him and his team, Counter Logic Gaming, by opponents and in-game bugs alike. The ROX Tigers AD carry Kim "PraY" Jong-in sets up in a top lane brush, ready to ambush Huhi with his top laner Song "Smeb" Kyung-ho.

Less than two seconds later, PraY is wiped off the map before Smeb has a chance to join him. The crowd roars.

"Holy crap!" caster Sam "Kobe" Hartman-Kenzler says after roaring with the crowd. It's not his first time watching CLG upset a top-tier team, and shades of his 2016 Mid-Season Invitational excitement echo throughout the Bill Graham Civic Auditorium, amplifying the cheers of the North American home crowd.

After a victorious CLG files off the stage, all smiles, Huhi joins interviewer Eefje "Sjokz" Depoortere who asks him the question that's on everyone's mind.

"Did you have fun playing Aurelion Sol today?"

"Umm... yeah," he says. It's half sarcastic and half genuine as his face brightens with a wide smile.

Both he and Sjokz burst out laughing, as the crowd, which had just died down after a round of "U.S.A" chants, erupts into cheers. Huhi plays to the crowd, who laugh and clap after every answer. Even in the distant press room, members of the media from all over the world respond to Huhi's charm, as they begin setting up for their own post-match interviews.

The win against the Tigers was a big one for a North American team that is often underestimated. CLG are used to being underrated by the community, but make no excuses for poor performances that open them to such criticism. During their Korean bootcamp, multiple members of the team acknowledged that the lowered expectations were justified, given the team’s performance during the 2016 NA League Championship Series Summer split. A win against the perceived top team at the tournament goes a long way to changing that narrative.

Shuffling into the interview room one by one following the game, Counter Logic Gaming are still all smiles, albeit wan ones — certain members of the team are still recovering from illness.

“We all got sick in Korea,” AD carry Trevor “Stixxay” Hayes says. “I was the least sick person everyone else was taking medicine and stuff — Zac [aphromoo] was probably the worst and he’s our main shotcaller so that’s not very good. Even before today’s game he asked the ref for a trash can just in case he needs to puke onstage.”

“He’s still pretty sick, he needs to sleep a lot but we don’t let it affect us. We never use it as an excuse for not playing well, and we’re doing well despite being sick.”

Prior to any player touching their mouse or keyboard in San Francisco at the 2016 League of Legends World Championship, CLG were a heavy underdog in their group. North American fans were still looking longingly at the playoffs, wishing that regular season kings Immortals were attending the World Championship in CLG’s place for the presumed strongest NA lineup.

When CLG beat G2 Esports in the first match of the tournament, it was a pleasant surprise — CLG visibly improved since their third-place match with Immortals and understand the current meta far better. When they then turned around and lost to Albus NoX Luna on Day 3, everything was still as expected.

“I’d say we were pretty frustrated about the loss yesterday because it’s like, ‘Damn it happened again!” Stixxay says, laughing. “But in the back of our minds we’re like, ‘Alright, we know that we’re going to beat ROX tomorrow.’"

CLG wins against presumed superior opponents and loses to presumed inferior ones. Their win over tournament favorites ROX Tigers on Day 4 is almost expected. CLG never perform according to the expectations set by the community or their most recent games.

“The same amount of preparation goes into every game for us,” Stixxay says. He smiles and shrugs good-naturedly.

“People might think that we disrespect our opponents or something but we make sure that we don’t. Sometimes we just don’t play well onstage, I feel like that’s the answer to why we always lose to Wildcard teams. For some reason we always play differently, even if we try our hardest not to. I think we always play to the level of our opponent. Which is a positive thing when you’re playing against a tier one Korean team.”

He shrugs again, shaking his head a bit in frustration. I joke that at least CLG banned Brand against Albus NoX Luna support and he looks relieved.

CLG have their own pocket pick in Aurelion Sol, but had been unable to showcase their team’s prowess with an Aurelion Sol composition until their match against the Tigers. Huhi's performance on the Star Forger is enough to yearn for a match against Team SoloMid where the champion had not been taken out of the game due to a bug.

Stixxay explains that their Level 1 bottom lane gank with Aurelion Sol was actually a product of their Korean bootcamp.

“When we were in Korea, Huhi found that he could push the wave instantly and roam bottom at level 1,” Stixxay says. “We started doing this and it’s pretty good. Huhi was the one who made the call before the game. He talked to me and aphro about it and we decided that it was a good idea because we know exactly how the lanes are going to play out, at least for the first wave. So he could just come bottom, grab a free kill, and it would probably tilt the enemy.”

He credits Tigers AD carry Kim “PraY” Jong-in for his skill and is uncertain as to whether their Level 1 attack on him accomplished what they had intended.

Group A, cited as a lock for the Tigers and G2 Esports in the first and second place positions is now significantly more interesting, with the Tigers, CLG, and upstart CIS team Albus NoX Luna tied up at 2-1.

“I think G2 is the clear weakest team in this group,” Stixxay says. “Albus NoX Luna are surprisingly better than I thought they would be. And the Tigers, I still think they’re the best. Even when we were so far ahead it was hard to close out the game because they were always looking for the next opportunity to jump on us. I managed not to get caught by it but it could have easily worked.” He pauses and then reiterates, “Albus NoX Luna are definitely good.”

Upsets haven’t been limited to Group A. Brazil’s INTZ e-Sports took out China’s first seed, Edward Gaming, on the first day. Taiwan’s Flash Wolves continued their legacy as the Korean Team Killers, unexpectedly taking out SK Telecom T1 after two sloppy losses against IMAY and Cloud9. Despite an abysmal performance in the 2016 LoL Pro League Summer Finals against EDG, Royal Never Give Up sit atop their group, tied with Team SoloMid and Samsung Galaxy.

“I think SKT is the clear strongest right now. They’re playing really well, they’re really dominant in all of their wins,” Stixxay says. “The team I’ve been watching is Samsung. We scrimmed them in Korea a lot and when they got stomped by TSM I was kind of surprised but then they came back and beat RNG so things are kind of crazy right now. Samsung is one of the better teams as well, so I have my eye on them.”

As CLG look to make their final push in Week 2 to make it out of their group, all eyes will be on them, CIS' Albus NoX Luna, and the ROX Tigers to see which two teams make it to the Round of Eight.

"We just keep focused and do the same things in prep that we always do," Stixxay says. "And hope we play well on stage.” 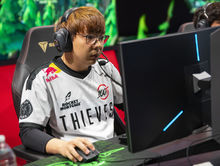 5d ago
LoL
Tyler1 is Saving the Rookies Riot Left Behind