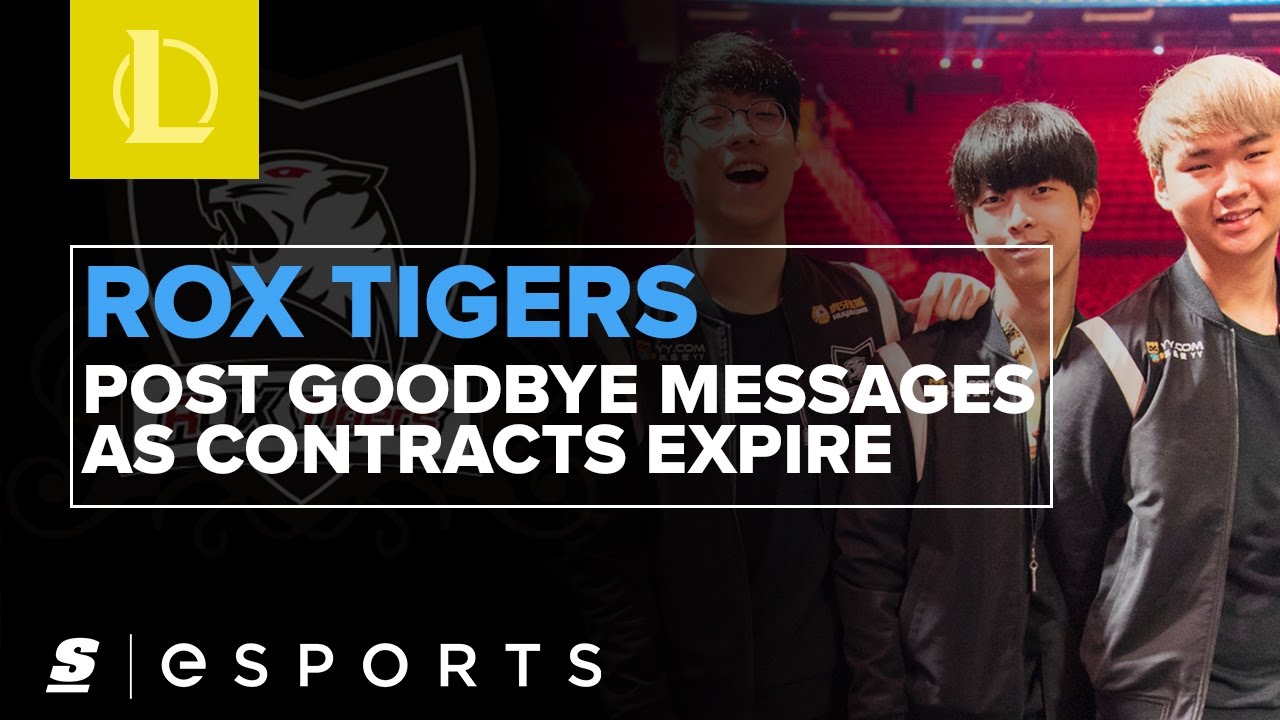 Song "Smeb" Kyung-ho, Lee "KurO" Seo-haeng, Kim "PraY" Jong-in, and Kang "GorillA" Beom-hyeon, whose contracts with the ROX Tigers expired Nov. 25 according to Riot's contracts database, posted their goodbyes to the team on Facebook and Twitter on Friday.

"I wanted to say thanks to all those who cheered me on as ROX Tigers Smeb all this time," Smeb wrote on Facebook.

GorillA and PraY both explicitly said in their posts they have left the team, while Smeb and KurO both thanked their fans for their support over the past two years. The team's two other members, jungler Han "Peanut" Wang-ho and secondary mid laner Hae "Cry" Sung-min, remain on contract until Nov. 30, but Peanut posted Nov. 24 that he may be leaving the team as well.

It is unclear if the team plans to field a roster in Season 7, or if the organization plans to disband after the departure of its founding members.

"There's so much I want to write, but I'm not too good with my writing skills, so I don't think I'll be able to say everything I want," PraY wrote on Facebook. "We went through a lot during two years, and to my teammates who worked tirelessly through it, [I want to say] thank you so much. For the fans that cheered us on through thick and thin, I want to say thanks."

None of the four free agents — who along with Lee "Hojin" Ho-jin formed the Tigers' original roster in November 2014 — said what they plan to do next.

Formerly known as the GE Tigers, the HUYA Tigers, the KOO Tigers and just the Tigers, the team have been a part of the LCK since Spring 2015 and a staple on the international scene. After Riot announced a ban on organizations owning multiple teams in the same league at the end of 2014, the former members of NaJin's two teams and Smeb from Incredible Miracle came together to former a new roster, originally sponsored by Chinese streaming site HUYA. They qualified for the new Korean premier league shortly afterward.

The Tigers quickly cemented themselves as a top Korean contender, stomping through the spring season and making Top 3 in summer 2015. They showed just as much prowess on the international stage, making it to the 2015 World Championship Grand Finals, though they ultimately lost to SK Telecom T1. Domestically, they were even more dominant this year, cruising through the spring split, though they again fell short of SKT in playoffs. They won the LCK for the first time in summer 2016, defeating KT Rolster in the finals.

At the 2016 World Championship this fall, they met SKT again in the semifinals, in what many would call the most exciting best-of series in League of Legends history. In the end ROX fell 3-2 to SKT, stopping short of a Worlds title for what may turn out to be the last time.

While ROX were at Worlds, a report surfaced that the organization intended to disband as soon as the event finished. ROX vehemently denied the report, saying they fully intended to renew the roster for another year. However, the organization noted that the players' contracts would expire at the end of November, and they could not guarantee the players would choose to stay.

The Tigers have not had a title sponsor since they parted ways with KOOtv at the end of 2015, and though they have maintained partnerships with HUYA and YY.com, they remain a relatively small organization with limited funds to compete for player contracts. With major investors taking an interest in Chinese, North American and Korean esports clubs, it has long been speculated that other teams in the LCK, LPL or NA LCS would try to poach some of ROX's top talent, and it is likely that players like Smeb and Peanut have received offers from around the globe since the start of the offseason.

Here are full translations of the messages posted by Smeb, PraY, GorillA, KurO and Peanut:

Hello, I'm the former top laner for the ROX Tigers Smeb Song Kyung-ho. On Nov 25, my contract ended. I wanted to say thanks to all those who cheered me on as ROX Tigers Smeb all this time.

Hello, I'm PraY, Kim Jong-in. At the end of this KeSPA Cup, I left ROX. There's so much I want to write, but I'm not too good with my writing skills, so I don't think I'll be able to say everything I want... We went through a lot during two years, and to my teammates who worked tirelessly through it, [I want to say] thank you so much. For the fans that cheered us on through thick and thin, I want to say thanks. I'm not too sure what will happen later, but please keep cheering for me. Thank you :D

Hello, I'm the ROX Tigers' former leader and support GorillA Kang Beom-hyeon. From today on I have left the ROX Tigers. I want to thank everyone who cheered on the ROX Tigers all this time.

I want to thank my teammates, coaches, and managers. I think I'm here and work hard because of you fans. I'm not too sure where I'll be headed next but I will continue to be a pro and I hope you keep cheering me on. Haha I love you all.

Hello, I'm ROX's jungler Han Wang-ho. Originally my contract is till Nov. 30. Right now I want to continue to be with my team, but realistically the situation isn't working out as expected, so I've gotten permission to receive offers from other teams. Right now, I'm not too sure if I'll continue to play on the team or move to another, but I will continue to work hard to show my best as a pro gamer.

Gabriel Zoltan-Johan is a News Editor at theScore esports and the head analyst for the University of Toronto League of Legends team. His (public) musings can be found on his Twitter