PowerOfEvil: 'KaKAO is the most passionate teammate I've ever had and is watching VODS/playing solo q 24/7'

Misfits are one of the surprises of the 2017 EU LCS Spring Split. Despite roster changes after their LCS qualification, the team got up to speed quickly and currently holds a 5-1 record. In Week 6 they will face Unicorns of Love — also sitting at 5-1.

Read on for PowerOfEvil's opinion on the Unicorns matchup, what Lee "KaKAO" Byung-kwon brings to the team house and how Misfits stays humble despite their success in the first half of the split.

Both Misfits and Unicorns of Love hold 5-1 records heading into Week 6, and you’ll be facing each other. What do you expect from the Unicorns?

I am sure Unicorns learned a lot at IEM. It is going to be a close series but I would call them the favorites. Whoever gets the better early game is going to decide the game in their favor.

What will it be like for you to face off against your former teammates on UoL?

It's always fun to play your old teammates and face them in the LCS. I am sure they are really eager to win this best-of-three, but so are we.

It feels like both Misfits and Unicorns were underestimated heading into this season. When did you first realize that this was a roster that could challenge the region’s best?

A lot of people ask this question actually. In my opinion the most important things for a successful team are that everyone respects each other and that you enjoy playing with each other.

You need to have fun/enjoy playing the game and you are going to learn way more and way faster.

How is the team dealing mentally with the success to this point? Do you ever catch yourselves becoming overconfident, and how do you stay grounded?

I don't know how the others deal with it, but I experienced both sides already.

I have experienced the side of the success and glory as well as the side of disappointments and failures. The side where you need to get as strong as you can, to overwhelm all the hate and bad comments about you, so that you can show everyone who you are and what you can achieve.

I am happy and grateful that I can do this with my new team and teammates at Misfits.

How do you feel about Corki and Ryze in the mid lane after the nerfs?

What sort of role has KaKAO taken in the team’s dynamic?

He is a really funny guy who brings a good team atmosphere into the gaming house. KaKAO is the most passionate teammate I've ever had and is watching VODS/playing soloq 24/7. This is a really great motivation for everyone to play more and more every day.

How has the Miami Heat / Misfits partnership personally affected you so far, if at all?

It hasn't affected me yet but maybe it will in the future. 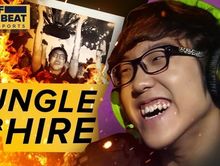 9 months ago
LoL
How Bad Luck and a Big Ego Ruined the Career of...