Team Liquid will be adding Team SoloMid AD carry Yiliang "Doublelift" Peng to their roster for the upcoming 2018 NA LCS season, according to multiple sources close to the organization.

In addition to Doublelift, multiple sources also say that the team is deciding between at least two supports outside of Matthew "Matt" Elento. According to Riot's contract database, Doublelift's contract with TSM does not expire until November 2019.

This news also follows reports that Liquid will be rebuilding their roster in 2018. ESPN's Jacob Wolf has reported that Team Liquid have acquired Jake "Xmithie" Puchero, Andy "AnDa" Hoang, Eugene "Pobelter" Park and Cody Sun's contracts from Immortals, and are getting ready to sign Cloud9 top laner Jung "Impact" Eon-yeong.

This will not be Doublelift's first time on Team Liquid. He briefly played for the organization in the last weeks of the 2017 Spring Split, when they were struggling and helped them avoid relegation by defeating Gold Coin United 3-2 in the promotion tournament.

Riot Games announced yesterday that Team Liquid would be one of the 10 permanent teams in the newly franchised NA LCS.

Team Liquid declined to comment when reached by theScore esports. 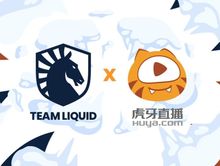