Winged on Jin Air's play at IEM San Jose: 'our gameplay is going to evolve until we find what fits us'

Jin Air entered the Intel Extreme Masters San Jose much like the most of the European and North American teams at the event: with a new roster and high hopes for next year.

Despite not winning a single game against Counter Logic Gaming, they remain focused on improving and jungler Park "Winged" Taejin sat down with theScore eSports to discuss his time in Brazil, taking over for Lee "Chaser" Sanghyun, and Jin Air's focus for the future.

What do you think is the difference between playing in Brazil and Korea now that you've been back in Korea for some time?

Communication was the biggest thing. Not just in game communication, but also just daily speech. Now that I'm back in Korea, being able to just do every day things is a lot easier, and as a player, the Korean solo queue competition level is higher so it benefits me more to practice in Korea. It allows me to level up in skill.

I've heard from Korean junglers in China that being a jungler is especially difficult with a language barrier. Did you have the same experience in Brazil?

The inability to speak the same language for a jungler is very difficult. I had the same experience.

Coming into Jin Air, your predecessor Chaser gained a lot of recognition playing for the same team. Does knowing that increase the amount of pressure you feel filling his shoes?

There's not a big burden that weighs me down. If I put in a lot of effort and practice a lot, I will be just as good or better than Chaser. I just have to work really hard.

Jin Air in general is playing very differently and becoming more aggressive. Do you think you personally have contributed to the change?

It isn't that I'm a very aggressive player. The top, mid, and jungle have changed, so the five of us are still finding out how to play together. Our game play is going to evolve until we find what fits us.

Against CLG, Jin Air seemed to make more mistakes later in in team fights than earlier. What are some things that Jin Air can work on as a team to improve your late game?

Top, mid, and jungle are all new right now, as I said. The top laner especially hasn't played much with a team. Communication in the team is not as polished as we would want it to be. As we keep working as a team on communicating and making sure everyone is on the same page, we'll work toward becoming a better team. 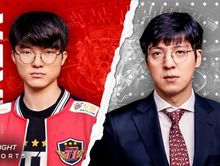 14d ago
LoL
Tyler1 is Saving the Rookies Riot Left Behind