Team Liquid have sold their controlling interest to aXiomatic eSports, an ownership group that features a lengthy list of investing co-owners including Magic Johnson, Peter Guber and Ted Leonsis. Guber is the co-owner of Golden State Warriors, Los Angeles Dodgers and Los Angeles Football Club and Leonsis is the majority owner of Monumental Sports & Entertainment, which owns the Washington Capitals and Washington Wizards among other sports franchises.

"Steve Arhancet and Victor Goossens will continue in their respective roles as Co-CEOs of Team Liquid and will also serve as Directors for Team Liquid," the group said in a press release. "Guber and Ted Leonsis will serve as Co-Executive Chairmen of their new esports ownership group aXiomatic and will be joined by a group of leading strategic partners in building their broad based esports enterprise."

aXiomatic’s list of investing co-owners features a number of big name company owners and entrepreneurs, including Steve Case, the co-founder of AOL, and Crane Kenney, the President of Baseball Operations for the Chicago Cubs. Bruce Stein, who has been the CEO/COO for companies like Mattel and Sony Interactive Entertainment, will serve as aXiomatic’s CEO.

"Ten months ago when we began this process our goal was to find the perfect blend of team and strategic ownership group to build a totally unique esports enterprise,” Stein said in the statement. “With Victor, Steve and the intellectual, experiential and reputational capital of our ownership group we expect to win big in this dynamic space."

Team Liquid currently fields teams in several esports, including League of Legends, CS:GO and Dota 2. Their Dota 2 team recently placed 7th-8th at The International 2016 while their CS:GO team finished second at ESL One: Cologne in July.

The organization also has teams in Heroes of the Storm, Hearthstone, StarCraft II and Overwatch.

Goossens discussed his excitement for Liquid’s future in the press release and put confidence into the merging of the two companies.

"Watching Team Liquid grow from a community site into one of the biggest esports teams in the world has been nothing but a joy for me" Goossens stated. "I am proud we share the same vision as this ownership group for the team and for esports as a whole, and I know that we will work well together."

This venture adds Magic Johnson to the list of professional athletes investing in esports. Other former pro athletes in the esports scene include Rick Fox, Shaquille O'Neal and Alex Rodriguez and the Philadelphia 76ers, who acquired Team Dignitas and Apex Gaming on Monday.

Olivia Da Silva is a news editor at theScore esports. She likes piña coladas, getting caught in the rain and dank no-scopes. You're eligible for free high fives if you follow her on Twitter. 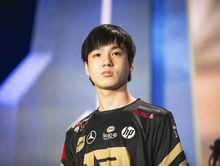