SK Gaming have moved Lincoln "fnx" Lau to a substitute position and will rely on former FaZe Clan player Ricardo "fox" Pacheco as a stand-in for the ECS Season 2 Finals and The ELEAGUE Major 2017, the organization announced on Monday.

The announcement closely follows a report from Slingshot Esports on Dec. 3, which claimed that fnx would be leaving the team and that fox would stand-in for the team at the ECS Season 2 Finals.

The report was also picked up by HLTV, after which fnx put out a tweet confirming his departure from the starting lineup, but claimed that he found out about the roster change through HLTV's story.

fnx has been part of the SK Gaming squad for over a year since Nov. 23, 2015, when the team were still part of the Luminosity Gaming organization. fnx came into the team having previously played on Games Academy, alongside Epitacio "TACO" Pessoa and coach Wilton "zews" Prado. This marked the beginning of the Brazilian squad that would go on to dominate the majority of 2016.

They went on to win MLG Major Championship: Columbus, the first CS:GO Major to feature a one million dollar prize pool, then went on to win the second Major of the year at ESL One Colonge 2016.

"Lincoln was crucial in our success as he was one of the important pieces that led us to achieve the things we did in the last year," SK's captain Gabriel "FalleN" Toledo said in the team's press release. "Our team can only be successful when all players are working constantly for the same goal."

Despite winning both Majors of the year, SK's performance began to dip from there. They haven't claimed a title since the Cologne Major and the team deemed it necessary to change up their roster.

"Lately, it didn't feel like everybody had the same vision for our team going forward," FalleN said. "A team lives [off] of good and tough moments during which you need special motivation, hard work and full commitment to get back to where you want to be.

"Everyone, including Lincoln, tried extremely hard in the last months to fix that situation but ultimately we felt a change was a necessary step for now to development as a team."

While fox has been a mainstay of the Portuguese team k1ck eSports Club, having played with them for over eight years, he's best known for playing with the FaZe Clan squad.

“First of all I'd like to thank every single player on the SK roster for this opportunity and for their confidence on my abilities," fox said in SK's press release. "Secondly I'd like to say that I will be able to fulfill two of my dreams at once.

"One of them is to represent one of the oldest and most respected gaming organizations in eSports, SK Gaming. I've had the dream of representing them since the CS 1.6 days. The other dream is to play for the best team in the world and the Brazilian iteration of SK Gaming, which was something I never thought was possible, but luckily it was."

fox also reiterated his role with SK as a stand-in for ECS and ELEAGUE, and stated that being a full-time member of the team was not discussed up until this point.

Here's what SK Gaming's lineup looks like for the ECS Finals and The ELEAGUE Major:

Dennis "Tarmanydyn" Gonzales is a news editor for theScore esports who enjoys whiskey, D&D and first-picking Abaddon Slardar Clinkz Medusa Oracle a P90 my Souvenir Negev Discipline Priest. You can follow him on Twitter. 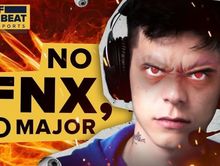 8d ago
Counter-Strike: GO
How the Man Who Never Gave Up Pulled Off CS:GO'...

2 months ago
Counter-Strike: GO
The Criminal Origins of CS:GO's Most Controvers...