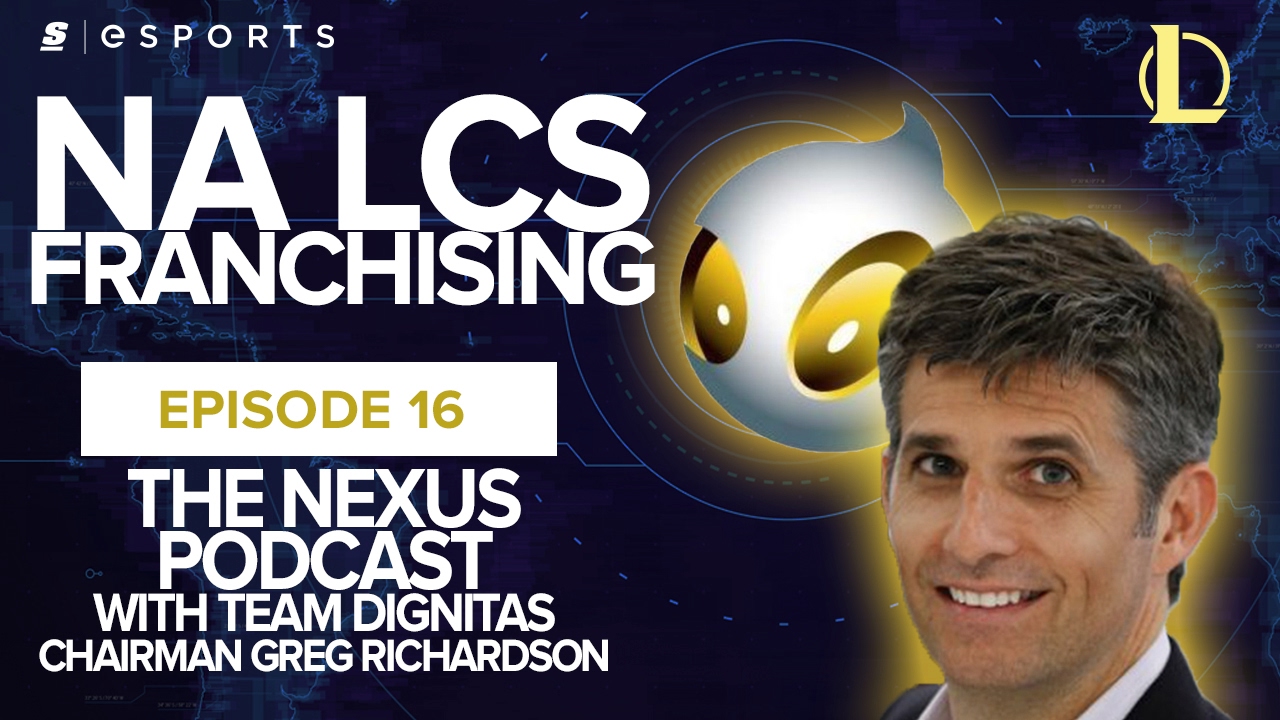 Team Dignitas Chairman on LCS franchising: 'Riot has laid the groundwork for something that has an incredibly positive return'

1:23: Initial thoughts on LCS franchising
4:17: Future investment into Dignitas and the LCS
10:49: What did Dignitas want to see in the announcement?
16:29: Riot influence vs. Owner influence
21:00: Longevity in the LCS
24:00: Comparing LCS franchising to the Overwatch League

It's our first ever emergency podcast at The Nexus, as we couldn't wait another week to get right into Riot's big franchising announcement.

Video games industry veteran and Team Dignitas chairman Greg Richardson sat down with Gabe, Josh, and Ryan to discuss the details of the NA LCS' newly announced franchising plans that were originally reported by theScore esports and later confirmed by Riot with additional details.

Team Dignitas is a storied franchise, being one of the original LCS teams before getting relegated at the end of the 2016 spring split. The Philadelphia 76ers went on to invest in the team and brought them back into the LCS after purchasing Apex's spot.

"When we, and when I say we I mean Josh Harris, David Blitzer of the 76ers and myself invested in Dignitas last fall, a big part of our thesis was around having the world's best League of Legends team," Richardson said. "And over the last split we didn't quite get there. We made the playoffs, but we made a big investment and we're continuing to iterate on the quality of the team and all the aspects to eventually get us a championship. And the experience has been fantastic."

As great as that experience has been for Richardson and Dignitas, it pales in comparison to Riot's franchising announcement. In Richardson's case, he believes that the introduction of franchising is the beginning of a system that will finally allow for team owners to be partners alongside Riot.

"But the real promise is what happened today," Richardson said. "The notion that League of Legends, which is a phenomenon of a game and really ground zero in building a real structured global esports, is kind of transitioning out of a world class esport as a marketing element for Riot into a standalone media business where we as team owners have a chance to be partners, not just in name but in principal, is fantastic. We cannot tell you how excited we are."

Compared to other sports, where an owner may only see profitable returns years down the line, Richardson thinks that Riot has created a system that will be very profitable for owners, who can quickly recoup their starting investment.

"We think Riot has laid the groundwork for something that has an incredibly positive return, and probably one that will happen sooner rather than later," Richardson said. "Many owners that buy into sports franchise teams have to wait years before they really get a sense of building a profitable business and recouping their initial investment and I think the way that Riot has laid this out is going to [incentivize] teams to invest well beyond the franchise fee because the structure of it is going to get us a cash flow sooner rather than later."

It remains to be seen whether esports like League of Legends will remain as popular now as they will be in the years to come, particularly in comparison to a sport like baseball or hockey. Richardson himself isn't sure what the League of Legends ecosystem will look like ten years from now, but he is certain that more game publishers will realize the power that esports can have in marketing their games.

"We just don't know," Richardson said. "As more and more games come out where competitive play is fundamental to the experience and publishers realize how powerful esports can be to making their publishing business successful and also with those rare few that break through, like League of Legends, to have a media business alongside it. We don't know what that looks like in 10 or 15 years from now and how fans are going to view that."

This idea of longevity is something that Richardson sees as the primary issue to deal with in a franchising model, both for game publishers such as Riot and Blizzard, and esports teams of those games. For team owners in particular, Richardson notes the space still available for monetization for everyone involved.

"I think there's two opportunities or challenges for us," Richardson said. "The first is, from a game design perspective and from the ongoing content development, what can we do to make those games feel fresh, new and interesting a decade or two decades from now?

"The second side is, now that we have this franchising opportunity, how do we collectively, as players, and team owners and Riot as a publisher, maximize the revenue while balancing that with the fans best interest? Right now, esports has these gigantic numbers, we've all seen them, the number of people concurrently viewing the LoL World Championships is staggering. But the dollars behind it, and frankly the things we offer fans, is so limited compared to what we see in other sports. That's the other part of the opportunity. If we're going to have longevity, we've got to have to figure out how to create that kind of revenue stream."

7 months ago
LoL
Unreliable to Unstoppable: How Cloud9 Created a...