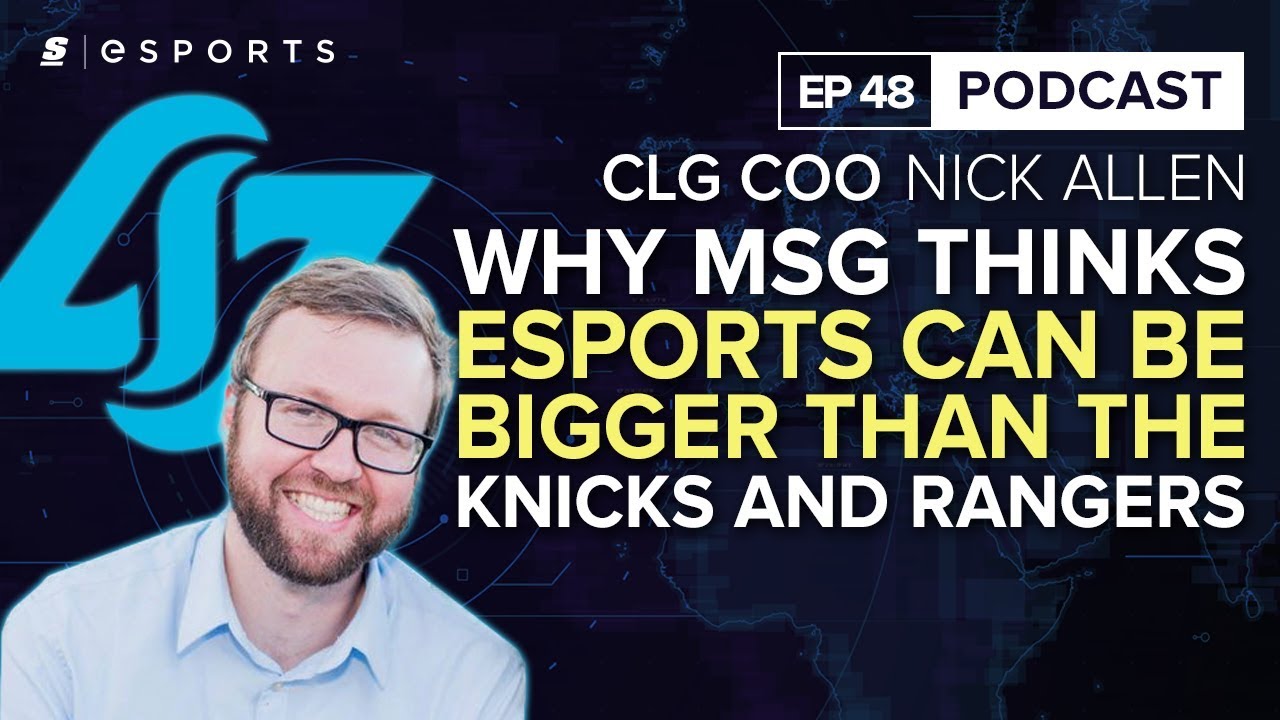 CLG’s Nick Allen: Madison Square Garden thinks esports can be bigger than the Knicks and Rangers

4:45 Nick Allen on the NA LCS franchise application process
10:02 How crucial was MSG to making it into the NA LCS?
14:15 What does esports need MSG for?
27:07 What does success for CLG look like, beyond simply winning?
18:56 Why esports could be bigger than traditional sports in 20 years
32:04 Why did CLG leave Counter-Strike?
39:45 Why net neutrality is important for esports

Esports could be bigger than traditional sports one day.

It’s an oft-repeated mantra. We hear it time and time again, often couched in some questionable analytics and a lot of optimism.

But what is by now an old refrain takes on new life when you hear it from representatives of a multi-billion dollar sports and entertainment company that operates two of the biggest sports franchises in North America and owns some of the United States’ most iconic sporting venues.

And that’s exactly the feeling at the Madison Square Garden company, who purchased Counter Logic Gaming in July, according to their head of esports and CLG COO Nick Allen.

Appearing on theScore esports Podcast, Allen discussed Counter Logic Gaming’s future in the NA LCS, shed light on why CLG (mostly) dropped out of Counter-Strike and explained why MSG sees a long-term future in esports.

CLG is among many esports organizations that have partnered with or outright been purchased by non-endemic backers with deep pockets and sports experience in the last year.

“I think it is a little bit of an arms race right now,” Allen said of the current avalanche of outside investment into esports. “The teams with resources can invest in top talent and can invest in infrastructure for their organization.”

And the wave of non-endemic investment has a snowball effect in esports.

“But it’s becoming more and more competitive as there's more and more opportunity around revenue and media rights and merchandising and in some cases ticket sales and other things. So as a result you’re seeing all of these people needing to feel like they need to keep up and infrastructure a way to do that,” he said.

“It becomes an arms race and you can’t be left behind.”

The escalation of investment is driven by something remarkably simple, said Allen: The desire to win. Winning means fans, and fans mean revenue.

“So much about fan base and so much about identity of teams, growing your brand and therefore growing your revenue as a business, comes from winning. Winning is the paramount goal because that’s a huge way to build fans and through that building revenue for you business,” said Allen.

“If you aren’t winning, if you don’t have the infrastructure and support, you’re left behind and you become a mid to bottom tier team,” he said. “We want to win in every way that we can.”

The results from non-endemic investment are already evident in the LCS, he said.

“It’s needed because some of the teams are doing it and it’s allowing them to push forward and have these absolutely insane rosters and infrasture -- I think TL’s a good example of that -- and so in order for us to keep up we also need those additional resources’ he said.

“This money’s helping every team play on a level playing field.”

But the right kind of investment for an esports org is not just about cash, or marquee sports brands, said Allen. He said CLG wanted a partner that was committed to a long-term future in esports.

“For CLG specifically, there was a lot of different parties we could have worked with in this type of partnership. We really wanted an organization that brought more than just resources and dollars. Someone that cared about our future, someone who cared about the long term of the industry. This isn’t a two-to-three-to-four year play for Madison Square Garden, this is a 20-year play for Madison Square Garden. At one point they told me in my interview ‘ we think this can be bigger than our two teams we have now, which is Knicks and the Rangers’.”

That evaluation is more speculation on esports’ future potential than any kind of prophetic prediction, but Allen said the feeling at Madison Square Garden that esports could be bigger than traditional sports is real.

“I do think that in their [MSG’s] head that is a possible reality that is worth investing in.”

CLG will be entering an NA LCS that has functionally eliminated the possibility of relegation, reducing the threat of being dropped from the league and losing value on MSG’s investment

While “winning is out number one goal above all else,” next on the list is brand building.

“Higher quality, higher velocity and more interesting content for our fans to consume” is important, Allen said. “Growing our Twitch presence” and “more merchandise that’s interesting and compelling” is another way to reach fans.

With the Federal Communication Commission's recent vote to repeal net neutrality laws, the hosts of theScore esports Podcast took the opportunity to ask the former Twitch head of esports about his stance on the subject.

If the laws were repealed years ago, the growth of esports could have been badly stunted, said Allen.

"It could have literally stifled the entire industry. It could have resulted in no one watching, no one caring, and this industry floundering and not doing anything and not being where it is today."

RELATED: CLG's Nick Allen on the FCC's repeal of net neutrality: 'It could have literally stifled the entire [esports] industry'

“It’s not that we didn’t like Counter-Strike, we loved our players, they have great personalities and obviously there’s bumpy roads throughout and that’s with any team,” he said. “But honestly it was about the fact that we as an organization weren’t able to be as successful in that sport as we needed to be both from a revenue and engagement perspective. It limited our ability to make the moves that we needed to make to be the championship-winning team that we wanted to be in the ecosystem.”

Allen did not rule out the possibility of re-entering Counter-Strike later down the road, once CLG was better positioned to succeed in that esports.
‘We just felt that we as an organization right now are not in a position to support a CS:GO team in the way that we needed to support them.”

As for the org’s all-women team, CLG Red, Allen said his goals are twofold: to determine how to further the cause of female presentation in esports and how “we win in that landscape as well.”