In comparison to the massive Chinese roster shuffle touched off by The Shanghai Major, the Western scene was rock solid. It looked like most North American and European teams would choose to stick with the rosters they had for the next Major. Sure, half of the teams were waiting to lock their rosters until the last minute, but that was just business as usual.

And then Saahil “UNiVeRsE” Arora and Artour “Arteezy” Babaev left Evil Geniuses, just days after clinching second at Dota Pit Season 4. Not only that, but the two players were off to break up the roster of Team Secret — the team that won The Shanghai Major — where they would replace Aliwi “w33” Omar and Rasmus “MiSeRy” Filipsen. Suddenly, no one was safe.

With only a few days left before Valve put a padlock on registrations for The International 2016, EG was left scrambling to fill out their roster. Rumors richocheted around the internet that Clinton "Fear" Loomis and Sumail "Suma1L" Hassan were considering leaving as well. In the end, EG pulled it together, calling on team alumni Kurtis “Aui_2000” Ling and Sam “BuLba” Sosale, who were at the time playing for Digital Chaos.

Suddenly it was DC without a roster, and less than 72 hours to go before deadline. For the young team, it looked like hope was lost; owner Shannon "SUNSfan" Scotten ominously tweeted out "dead team," while newly acquired mid laner Roman "Resolut1on" Fominok echoed w33's dark humor from the day before.

Perhaps the two players formed a kinship over that tweet, because soon w33 and his former teammate MiSeRy announced they were teaming up with Resolut1on, plus David "Moo" Hull and Martin "Saksa" Sazdov, both themselves hapless components left behind by teams that couldn't field full rosters. The ragtag band of misfits, orgless at first, decided to carry on with SUNSFan and Digital Chaos — a mid-tier team with a suddenly very talented lineup and a lot of international attention.

To call this an upheaval would be an understatement. Three major organizations, including both the global champions of the most recent Major and the previous year's International, will head to Manila and TI6 soon after as drastically different teams. Time will tell who will benefit the most from the Great Roster Swap of 2016, but no one will be playing with the same dynamic.

Come roster lock day, Secret, EG and DC had each signed up with a full five-man roster. Everyone breathed a sigh a relief. Now, for the hard part: winning the biggest tournament in esports.

Even though they it meant breaking up the roster that won them a Major, Secret arguably benefit the most from these roster swaps for one reason: UNiVeRsE.

MiSeRy’s skill in the offlane was never in question — on the contrary, he’s proven to be a versatile player, and he made a substantial contribution to Secret's victory at Shanghai. But UNiVeRsE's play at the same tournament was unparalleled. His KDA of 5.8 was the highest for any player at the Major, surpassing all of his EG teammates and every other offlaner.

Even before the Major, UNiVeRsE was dominant. As Alan "Nahaz" Bester pointed out in an article for ESPN, “From the beginning of DAC through The International 5, Universe's 4.71 [KDA] was in the top 10 among all pro Dota 2 players, and just ahead of Arteezy's 4.62.”

This is why I said that UNiVeRsE was the best Dota player in the world back in February — and though a lot of my other Shanghai predictions didn't come true, that one held up. His skill is unmatched, and he succeeds regardless of what hero he plays.

As for Arteezy, he's a decent replacement for w33. Although Secret's former mid laner had a slightly higher KDA at Shanghai than Arteezy (5.18 to 4.81), he was less efficient at farming (534 GPM to 607). Note though that Arteezy played position 1 for many of EG's games, which likely boosted his overall farm stats.

w33 fit well into Secret’s team dynamic at the Major, and I'll be looking at how Secret perform at ESL Manila before I judge whether or not replacing him was the correct move. Regardless, Secret can’t go wrong with one of the best farmers in Dota, and barring any unexpected changes in 6.87, Arteezy should continue to be a capable laner.

With the departure of Arteezy and UNiVeRsE, EG was in a tough spot. Replacing the world's most popular mid is a tough job in and of itself, but replacing an offlaner they've fielded for two and a half years and two consecutive Internationals? Any pickup would pale in comparison.

But as compLexity captain Kyle “swindlemelonzz” Freedman reminds us:

With that in mind, Aui_2000 is a fantastic addition to EG. Though he was dropped after TI5 in part due to personality conflicts, his large hero pool played a big role in EG's stunning victory. As support, he forced opponents to ban his pocket picks like Techies to prevent a lopsided defeat. This in turn allowed his teammates greater freedom in picking their heroes.

Aui will not be playing support in the new EG, however. He'll instead be hard carry, a position he played on Team Dignitas from 2012-13. It will take a few matches to see whether or not he is just as strong in this new position as he was on support.

Replacing UNiVeRsE on the roster is BuLba, who helped coach EG through their TI5 championship. As a player, he has seen much less success, considering that DC have not had the greatest tournament performances in the year that they've existed. Replacing UNiVeRsE is a tall order, but BuLba has room to improve. Joining EG might showcase his skill in the offlane, but for now he remains untested and unproven.

Since Resolut1on joined in February, DC has completely replaced their roster. They have the most to gain or lose in the next few months, depending on whether the new lineup can develop good chemistry.

Fortunately, the addition of w33 and MiSeRy give the team a lot of potential. w33 held the second highest KDA at The Shanghai Major after UNiVeRsE, and his Invoker was arguably the highlight of the entire tournament. Meanwhile, MiSeRy finished with a fantastic average assists rating of 10.89 at Shanghai, the highest on Team Secret. Both would be strong additions to any lineup, and DC will have to rely on them pretty heavily through the spring season.

Since the team's creation last August, DC have struggled to qualify for tournaments, narrowly losing to other American teams at the last moment. At both the Frankfurt and Shanghai Qualifiers, DC finished third, losing to Team Unknown and compLexity, respectively. As for events DC did qualify for, the team finished in 7th-8th place at the Nanyang Championships and last place at World Cyber Arena 2015. It has not been a good run for the organization.

But the new roster could very well change that. Depending on how well the team works together, they could prove to be formidable opponents in the American Dota scene. DC is the biggest X-factor of the roster shuffle — one that could ruin other teams' plans if they aren't taken seriously. 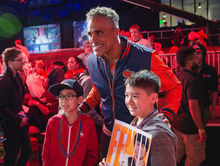