According to NiP's press release, pyth has been dealing with hand pain for the past two months, and the team has decided to give him time out to recover.

The player is "considered as one of Sweden’s largest up and coming talents within CS:GO," NiP said in its press release. "We would like to send a special thanks to our friends at Epsilon Esports for allowing us to use Joakim during the first games of ESL Pro League Season 4, and wish him the best of luck on his debut!"

disco doplan will play in NiP's ESL Pro League Week 1 matches against Virtus.pro and Team X. He will continue to stand in until pyth recovers.

4 months ago
Counter-Strike: GO
The Lovable Bully Who Became the Undisputed Kin... 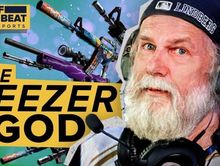 10d ago
Counter-Strike: GO
The Clone That's Trying to Kill CS:GO: The Stor...

a month ago
Counter-Strike: GO
Elders with AWPs: How a Group of Bloodthirsty S...
Advertisement