The San Francisco Overwatch roster features a mix of NA and European talent, including star hitscanner André "iddqd" Dahlström and former Immortals tank David "nomy" Ramirez. According to Wolf, two members of the eight-man team, Jay "sinatraa" Won and Matthew "super" DeLisi, will be unable to compete in the League until they turn 18 next year.

"It has been an incredible journey working with our head coach Brad Rajani to bring this roster together," NRG president Brett Lautenbach said in a statement. "These players are fearless and I have every bit of confidence in them for season one of Overwatch League."

Singer and actress Jennifer Lopez was featured in the team's announcement video, saying: "There's been a lot of people talking about the Overwatch League roster. We trialed lots of amazing players from around the world for many, many months to put together what we think is a beast of a team."

The inaugral season of the Overwatch League will start Jan. 10, 2018 and run until June. The season will have 12 teams based in cities ranging from Seoul to London and of course, San Francisco. 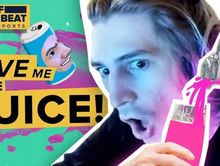 6 months ago
Overwatch
How a Mysterious Liquid Turned xQc into Twitch'...