Super Smash Bros. for Wii U player, Nairoby "Nairo" Quezada has announced on Twitter that he is no longer part of Team Liquid.

The news comes on heels of Nairo's victory at Super Smash Con, where he defeated Samuel "Dabuz" Buzby to take first place in the Smash 4 tournament. He came in 13th at EVO 2016 after being defeated by Larry "Larry Lurr" Holland. His last major win was at the MLG World Finals last year where he broke Gonzalo "ZeRo" Barrios 55-game win streak. 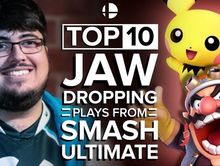